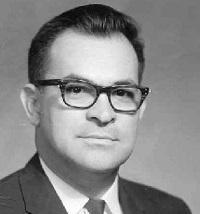 BL Garza Middle School was named after Mr. Baldemar Lino Garza. The school was dedicated on November 20, 1999. Mr. Garza was born in Mercedes, Texas and was the oldest of ten children. He passed away on October 4th, 1975 at Edinburg General Hospital. His father, Leoncio S. Garza, was a pharmacist and businessman in Mercedes, Texas in the early 1900's. Born in Penitas, Texas, his mother, Nellie Chapa Garza, was a fourth generation Texan.
After graduation from Mercedes High School in 1937, B.L. and his family moved to Edinburg where his father opened Garza Pharmacy. B.L. joined the United States Navy in 1941 and served until 1947. During this time, he worked his way from hospital apprentice to Chief Pharmacist's Mate while serving in the Atlantic, the Mediterranean and the Pacific.
In 1952 with help from the G.I. Bill, he received his degree in Pharmacy from the University of Texas in Austin. Upon graduation, he assumed ownership of Garza Pharmacy in Edinburg. He became a member of the Texas Pharmaceutical Association in 1952 and was a charter member of the Rio Grande Valley Pharmaceutical Association. His commitment and dedication to his profession gained him recognition as an Outstanding Pharmacist by the RGV Association in 1967 and Texas Pharmacist of the Year in 1968.
Among his many services to the community, B.L. was president of the Edinburg Municipal Hospital Board, a member of the Board of Directors of the Edinburg and Rio Grande Valley Chamber of Commerce, and a member of the Distributive Education and Vocational Office Education Boards of Edinburg High School. In 1966 he was recognized for his efforts in behalf of the youth of the community with an honorary life membership in the Distributive Education Clubs of America. B.L. believed that involvement in one's community made for a better living environment for everyone.
B.L. was married to Margaret Saeta Garza. He is survived by his wife, three children; Adriana Saeta Garza, Carlos B.L. Garza (Sharon), and Teresa Garza Vina (Robert), eight grandchildren, and three great grandchildren.